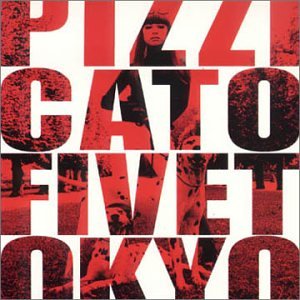 released 1995.09.30, nippon columbia / triad records.
Tokyo in the nineties was the center of counter culture, with glitzy visual rock bands and Johnny’s idols plastered here, there and everywhere. My personal favorite subculture was the obscure and sample laden Shibuya-kei.

Pizzicato Five were definitely one of the more notorious groups that perfected and polished the sound of Shibuya-kei, but their 1995 effort 『Romantique 96 』often feels overlooked and underrated to me. The album’s promotion was cut short when singer Nomiya Maki got pregnant in the middle of the campaign and it seemed the album came and went, with only one single release.

There’s a vast selection of brilliant tracks on this collection (hell, it’s a 16 track set and I normally don’t have the attention span to listen to LPs longer than 12!), from acoustic and soothing 『The awakening』to the club fresh 『Flying high』. The album’s most unique cuts 『Contact』and『Nata di marzo』lean toward the weird side but have an irresistible charm to their arrangements, and Miss Nomiya will keep you entranced with her vocals through the lengths of these quirky tracks.

The latter half of the album is where it solidifies itself as my absolute favorite of P5’s offerings. 『Catwalk』through 『Coda』are a run of musical genius, and Pizzicato throw in a maniacal cover of the already bizarre Plastics’ 『Good』in there for good measure.

All in all, I truly wish this album was more popular in the P5 circles, but I can also see that maybe it was fine that the era ended prematurely, as most of the songs in this album aren’t particularly single candidates. This isn’t to say that they aren’t quality, but I can’t see tracks like 『Nata』and 『Icecream meltin’ mellow』as bonafide radio hits. You have to give Japan their credit though, I am just grateful albums like this even got released in all their kitschy glory.

I will individually rate the tracklist with 1-5 stars below, and you can check out the only single from the era, as well as my personal favorite song from the album below!